History Of The Coop

On May 11, 1935, President Franklin D. Roosevelt signed the Executive Order that created the Rural Electrification Administration in a time that the nation’s farms needed electric power, and the nation’s workers needed work desperately. This program, born during the Great Depression, brought electric lights and power to millions of Americans who were literally living in the dark – only a half-century ago. In 1935, electric power was confined to the town and city areas because the power companies thought it would cost too much to bring electric power to the country. Power companies said it was impractical and unprofitable to extend electric lines to the people living in the rural areas. They believed that rural people could not afford the costs involved in getting electricity to them. When REA was born, barely 11 percent of the farmers in America had central station electricity. 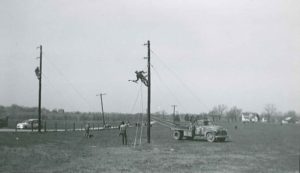 In 1935, Congress passed the Rural Electrification Act, setting up a long-term loan program, which made it possible for rural people to work together to serve themselves with electricity.As a result of these circumstances, a few far-sighted, dedicated and hard working rural people of West Central Missouri began working together for the purpose of providing electricity for themselves. The work fell to a handful of persons who saw the potential, and they carried their message from farm to farm to “get lights” on a cooperative basis.

Once the word got out that a REA Cooperative was being formed in the area, group meetings were held in area school houses to explain the program and get these people to sign up for a $5 fee. During this time, $5 was a sum not to be taken lightly and there were some who were not sure that electricity was worth the expense.

The next step was to get out the county road maps and begin to plot the homes of the people who had signed up and draw in the general idea of the path of the proposed electric lines. The County Agent’s office in the basement of the Bates County Courthouse was the center for this activity.

The campaign then began to ask the landowners along the proposed way of the electric lines to give the Cooperative an easement for these electric lines. The organizers had to obtain these easements without being able to pay for the easements because the program was to be based on “free rights-of-way” over these lands.

On August 9, 1938, Osage Valley Electric Cooperative Association was incorporated. The original incorporators were:

During the early months of the organization, the Board of Directors met on almost a weekly basis in the Circuit Court Room in the Bates County Courthouse in Butler. Most of the Directors’ time was spent organizing and planning for the new Rural Electric Cooperative.James DeArmond was selected as the Cooperative’s first legal counsel, and he played a major role in helping to form the organization during the early stages of the Cooperative’s development.

When a sufficient number of membership applications were received, Black and Veatch, consulting engineers, from Kansas City were appointed to perform the engineering duties. They began with the “A” Project, which was to construct electric distribution lines to serve rural members in Bates, Cass and Henry Counties. 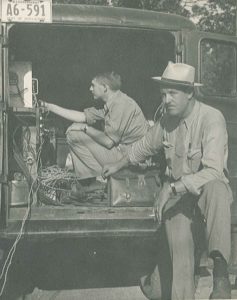 The Cooperative’s first loan application to the Rural Electrification Administration was approved in February 1939, and Earl Westhoff was hired as the project superintendent.A construction contract was let and approved in August 1939 to build approximately 352 miles of rural distribution line on the “A” Project. Construction on the “A” Project was completed in May 1940 with about 177 members receiving electricity for the first time. A few weeks later, the “B” Project was completed and additional members were added. The end of 1940 hooked up 779 members. With the coming of World War II in 1941, virtually all construction of new electric distribution lines was stopped because of the lack of sufficient line materials. During the war years, about 500 new members were added to the Cooperative’s lines, which now numbered about 524 miles.

Earl Westhoff served as the project superintendent until his resignation in March 1941. Al Dickman, who had been with the B&M CONSTRUCTION CO., was then appointed as the temporary project manager, and he served in this capacity until he resigned in July 1942. J.F. Lauderback was appointed the new project superintendent in October 1942. In September, 1943, Mr. Lauderback’s title was changed to manager, and he continued as manager until September, 1956. Maurice S. Solomon was then hired as manager, and he was employed as the manager for 18 years, retiring in November, 1973. James D. Hacker was then selected as manager in March, 1974, and Jim served as the manager until his retirement in May, 1985. The Board of Directors then hired Darold Wulfekoetter as the new manager, and he served the Cooperative in this capacity until his retirement in May, 1999. Jon McClure was hired to serve as General Manager in June 1999 with Daryl Veatch taking the position in 2011.

Today, Osage Valley Electric Cooperative serves over 15,000 members on over 3,800 miles of rural distribution lines. The Cooperative has fifty employees dedicated to serving the Cooperative’s members with the most economical and reliable electric power possible.

In the 1960’s the rural electric program’s needs for loan funds exceeded the amount of funds that Congress was willing to provide through the traditional REA loan program. There was a need to develop a supplemental financing program to ensure that adequate funds were available to meet the growing needs for new loan funds. In 1969, a cooperative self-help financing organization was established. That organization was the National Rural Utilities Cooperative Finance Corporation (CFC). Osage Valley was one of the founding members of CFC and made its first concurrent loan with CFC in 1973.

In 1994, the U.S. Department of Agriculture was reorganized and the traditional REA was eliminated and made part of the new Rural Utilities Service (RUS). RUS is now responsible for the U.S. Government’s rural electric loan program. To construct the electric lines necessary to serve their members all throughout, Osage Valley Electric has borrowed over 28 million dollars from the REA/RUS and CFC. The Cooperative has repaid almost half of the total amount borrowed. Osage Valley Electric Cooperative, along with more than nine hundred electric cooperatives in this country, has made the REA/RUS program one of the best investments the U.S. Government has ever made. It is the best example of people working together and people working with their government to provide a service that probably would not have been provided without this cooperation.